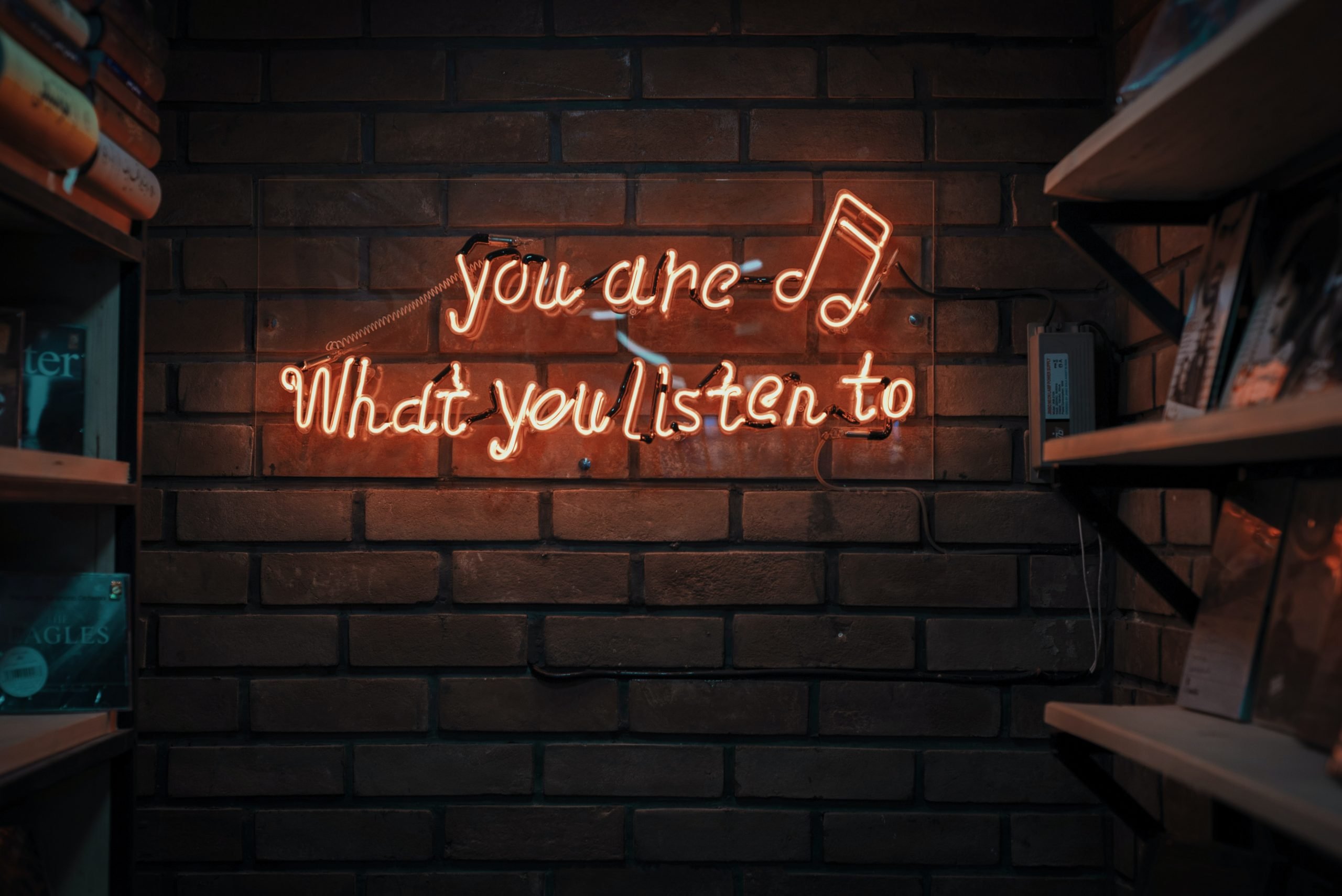 You are what you listen to - what are you listening to?

Photo by Mohammad Metri on Unsplash

In an earlier blog, I wrote about my experience of listening, being listened to and of feeling heard. A part of my brain is still thinking about listening and drawing connections to other aspects that I didn’t cover.

The image for this blog is different from what I originally thought I might find to accompany the text. I thought about ears, headphones and body language. I thought about friends in conversation. I thought about someone caught in a pose that said ‘I’m thinking over here.’ I loved a picture of a Jack Russel puppy, head cocked to the side, ears up for entertainment, asking about the realisation of a promised walk.

But the picture above which says, “you are what you listen to” resonated in the self-talk space which is a big part of our mental health and wellbeing.

A client shared with me this week her recent discovery that her self-talk is what drives her self-worth. Such a powerful insight, and I’m still thinking about that. My research into resilience agrees with the importance of working on our inner psychological resources. They are key to accessing and sustaining resilience. My work using compassion-based approaches has lighted the importance and reach of the tone of our inner worlds’ communications. We are in the company of this voice more than the company of anyone else. Making changes here makes the greatest impact to our wellbeing.

The listening challenge then is a different one.

It’s about awareness and curiosity as to our inner voice habits. What do we say and how do we say it? If the voice is harsh or critical – it’s about working out what’s behind the critic’s voice. That requires some deep listening.

It’s about working with that narrative that keeps us small. How has this tried to protect us? Is it still appropriate? What else is true here?

It’s about seeking alternatives to the critic. About becoming a friend to ourselves. For me Tara Mohr’s work has been an incredible support here. Through Tara I discovered the Best Possible Future Self exercise and have managed to access my wiser older self, a mentor of sorts. Now the mentor takes up space too and provides a valuable counterbalance to what was the foghorn of the scathing inner critic. The critic has had to learn some patience. I do want to hear what she has to say, but not when I am coming up with a new idea or creating something from scratch. She gets to weigh in when I am ready for constructive feedback, when I’m looking for where my ideas and approach might be vulnerable.

Dare I say it, the old critic is turning into a bit of an ally. I have had to get her to take up the right amount of space though. And I’ve had to invite my inner mentor back to the stage.

Outside words, loud words, or words that fall loudly on your ear

About 20 years ago now my mom was really ill. In fact, she was dying. And dying is one of those things we know is going to happen one day. In the future. Just not now. And not to me. Or anyone I love. Right?

One of my sisters was living in London at the time and had a standby flight booked to South Africa. The dilemma was when to come home exactly. A friend of mine, Jill, offered me wise counsel. She said to me “there’s never too much time on this side of the line, there’s only too little on the other side”. Those words struck such a chord with me then and they still resonate now. It was one of my early experiences of what I’ve come to call “words falling loudly on my ear”. I’d been walking around with the dilemma of what to tell my sister for days. Neither doctors nor nurses would commit to any timelines.

Visiting that hospital later that day, I bumped into my aunt who had been visiting my mom. ‘How is she?’ I asked. My aunt nodded and confirmed that she was worse.

‘Is she really?’ I asked because I found that I couldn’t tell anymore. Time and what’s changing over time has lost its anchor and everything was sort of joined. It became fluid and difficult to judge or understand the landscape.

I was listening for what to do and what to advise my sister with my whole body, not just my ears. Some version of myself heard the words in a different way. Because of these two messages, I knew I had to call London.

‘Get onto the next flight sis, I think it’s time’.

She did and 48 hours after she landed my mom died.

Other times it is the words of a poem, a song, or a passing comment that someone makes. It’s words on a sign that seem especially bright. They resonate and move us.

The questions that just won’t rest that bubble up from within like ‘Is this it?’.

They are worth a conversation.

They are worth the work of creating space, silence and of listening for that truth.

Loving what is wild

Mettamorphosis: What’s in a name?

We use cookies on our website to give you the most relevant experience by remembering your preferences and repeat visits. By clicking “Accept All”, you consent to the use of ALL the cookies. However, you may visit "Cookie Settings" to provide a controlled consent.
Cookie SettingsAccept All
Manage consent

This website uses cookies to improve your experience while you navigate through the website. Out of these, the cookies that are categorized as necessary are stored on your browser as they are essential for the working of basic functionalities of the website. We also use third-party cookies that help us analyze and understand how you use this website. These cookies will be stored in your browser only with your consent. You also have the option to opt-out of these cookies. But opting out of some of these cookies may affect your browsing experience.
Necessary Always Enabled
Necessary cookies are absolutely essential for the website to function properly. These cookies ensure basic functionalities and security features of the website, anonymously.
Functional
Functional cookies help to perform certain functionalities like sharing the content of the website on social media platforms, collect feedbacks, and other third-party features.
Performance
Performance cookies are used to understand and analyze the key performance indexes of the website which helps in delivering a better user experience for the visitors.
Analytics
Analytical cookies are used to understand how visitors interact with the website. These cookies help provide information on metrics the number of visitors, bounce rate, traffic source, etc.
Advertisement
Advertisement cookies are used to provide visitors with relevant ads and marketing campaigns. These cookies track visitors across websites and collect information to provide customized ads.
Others
Other uncategorized cookies are those that are being analyzed and have not been classified into a category as yet.
SAVE & ACCEPT
×
×

We will follow to coordinate the best time and date for our session.